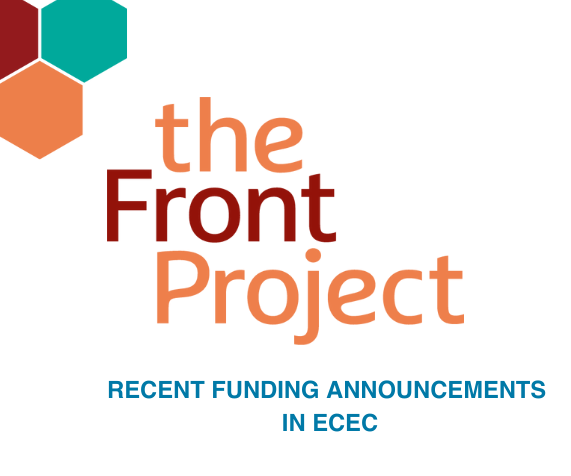 When the Front Project started 5 years ago, the advocacy intent was to influence the community, business and Government to support and implement 2 years of early learning in the years prior to school. We felt this was one way of tackling the level of developmental vulnerability and disadvantage children experience in Australia.

When the Front Project started 5 years ago, the advocacy intent was to influence the community, business and Government to support and implement 2 years of early learning in the years prior to school. We felt this was one way of tackling the level of developmental vulnerability and disadvantage children experience in Australia.

The adoption of 3 and 4-year-old kinder by the Victorian and NSW’s Governments, as well as the commitment by the South Australian Government shows progress towards this goal.

This shift in the dialogue, policy and funding for early childhood education and care (ECEC) is significant, and is built on decades of work by many who have made the case, generated evidence, developed policy and created the conditions for change.

There is more to be done to ensure every child has access to high quality early education and care in Australia. Importantly, as we all embark on contributing to changes in ECEC, we need to keep children and families central, and we need to support and upskill educators and teachers. It is after all, a system that relies on the quality interactions between children and educators and teachers to generate the social and economic benefits that all of the investments are trying to realise.

Recently, the Victorian and New South Wales state governments released a joint statement confirming their ‘joint commitment to transform early education’, publicly highlighting their intent of a long-term policy commitment to ‘transform early childhood education’. The joint statement highlights benefits of a full year of early education for children. “Giving them the skills they need for school, but just as importantly, the skills they need for life.”

The Front Project acknowledges that the joint announcement is a significant step forward to ensure that the system can deliver quality, affordable and accessible early education to children.

Developments in the ECEC sector are not restricted to state and territory governments. The new Federal ALP Government has announced several key aspects of its ECEC policy platform, most of which will be included in the development, and subsequent implementation, of an Early Years Strategy. Labour states that this Strategy will ‘create a new integrated, holistic, whole of government approach to the early years’ and will ‘examine the range of programs and funding delivered across the Commonwealth Government that directly impacts on early childhood development’.

Here is a snapshot of the announcements by Victoria and New South Wales:

The Victorian government pledged a $9 billion package over the next decade which will provide every Victorian four-year-old access to a free, 30-hour-a-week program, up from the current 15 hours. With four-year-old kinder being recast as ‘pre-prep’. It is important to note that this includes funding for announcements already made.

The Government also announced subsidies of up to $2,500 for children in three- or four-year-old kinder from 2023 and 5,000 new, lower-cost childcare places at 50 new state-run centres, with the first to open in 2025. The new early learning centres will deliver childcare, kinder and pre-prep programs and will be built in suburbs with long waiting lists, estimated to boost the overall supply by between 3 and 5 per cent.

The NSW Government has announced $5.8 billion to be spent on ECEC over the next decade, which includes the provision of 30 hours of kinder for the year before school for all children in NSW by 2030. The trial of this program will commence in 2023 in some communities. As part of this announcement, the Government acknowledged that the plan for universal access requires the recruitment and training of more early education teachers and the construction of more preschools co-located with primary schools.

They have also announced an initial $775 million to be spent over the next four years to create 47,000 extra childcare spots and support to the workforce. Initial information suggests that this will be done on a ‘auction-type’ system, with the government targeting areas with limited access to centres or where a shortage of childcare places exist. While additional information is still needed on how the additional childcare places will be provided.

Of the $775 million, $281.6 million will form the workforce package in the 2022/2023 Budget. The package includes scholarships for early childhood teacher courses in higher education of up to $25,000, VET scholarships for educator training of up to $2,000 and employer supplements for staff retention. It was also acknowledged that this investment in the ECEC workforce and ensuring a ‘sustainable supply’ of early learning professionals is critical to making the NSW Government’s reforms a reality.

The NSW Government is also focusing on the broader early childhood development sector and the intersections between ECEC and workforce participation. An additional $376.5 million investment over the next four years in child development and family support will also form part of the NSW 2022-2023 Budget. This Brighter Beginnings package will provide all children with a full suite of developmental checks before they start school. And nurses, doctors, allied health and support workers from four of NSW’s newest hospitals will have access to onsite extended hours childcare as part of their focus on ensuring healthcare staff have access to ECEC facilities that suit their working needs.

Opportunities for The Front Project.

The Front Project will work closely with the Federal government (both ministers and key independents) in the development of the Early Years Strategy, and through key opportunities such as the upcoming proposed Job Summit.

The Front Project continues to work with the Victorian Department of Education and Training to increase access to the Upskill Program for early years studying to become qualified early childhood teachers. This is part of our efforts to increase the early education workforce. The Front Project recognises that challenges are also present such as the speed at which reform is being announced in Victoria and NSW, and the opportunities for the Front Project to be part of the discussion in a productive way while ensuring the voices of children and families are being heard in this process.

These changes in the policy and funding landscape mark a moment of reflection for the Front Project, and an opportunity to clarify the advocacy and program activities for the next horizon.